Lexus got 7,963 seconds of attention for every ‘000 impressions served using high impact formats 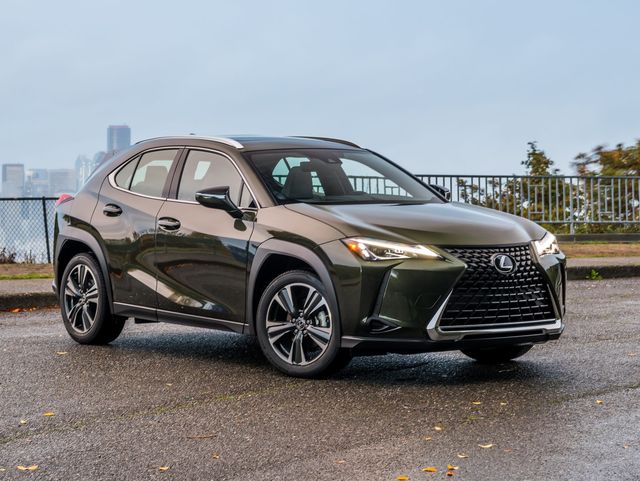 Prompted ad recall was 7x higher for the Adnami Topscroll compared to the small banner.

On average, people looked at the Adnami Topscroll 16x longer than the small banner.

Lexus is an automotive company that takes design, relentless innovation and uninhibited performance and turns them into moving experiences. The Lexus UX is the latest electrical vehicle by the company and challenges everything that went before. Its bold design expresses unmistakable strength, yet its surfaces suggest a character that is both stylish and dynamic.

Lexus has run several high impact campaigns using Adnami's formats. To get more insights into the drivers of attention and advertising results, Lexus choose to be part of a larger eye-tracking study conducted by Lumen Research. This article will present the findings.

Lumen Research is an attention technology company that uses advanced eye-tracking to help brands and publishers measure and buy attention. In this study, Lumen put together a panel of 300 respondents in Denmark, all over 18 years old. All respondents were recruited online and placed into three different cohort groups. They used their computer which turned their own device into an eye-tracking camera.

To obtain as ‘live’ engagement data, all groups were exposed to three webpage articles. Each respondent saw an Lexus ad as either an Adnami Topscroll or a banner format. The respondents then answered spontaneous, prompted, and product recall questions. Lastly, the respondents were shown a Lexus ad with the Adnami format in-isolation and asked about ad perception and brand considerations.

Formats tested in the study

Lumen tested two different digital formats; an Adnami Topscroll and a small banner. Importantly a similar creative was used for both formats. This allows us to partially remove the creative as a confounding variable in the analysis, putting the focus back on the formats themselves as drivers of attention and their subsequent impact.

Testing the ads in context

Below is an example of one potential in-context exposure; each respondent saw three webpage articles, randomized in order, with a mix of different ads. The webpages were fully scrollable, content clickable, and ads un-muteable. They were not recordings of web pages.

With the creative itself being largely removed as a confounding variable; the significantly higher levels of attention for the Topscroll should be attributed to the format.

Greater attention leads to higher recall– because of this, recall was higher for the Adnami Topscroll than the standard display format.

Our formats have helped 1000+ brands to improve their attention and ad recall results.
Get in touch to learn more about how we could support your business needs.

The Topscroll was viewed 16x longer than the small banner

On average, once the formats were viewed, participants looked at the Topscroll for significantly longer than the small banner format–16x longer. The difference appears to be down to the success of the Topscroll and not due to an underperformance of the small banner. In fact, the average view-time for the banner ad is within the expected range we see in the Lumen norms database.

The Topscroll showed 72x (!) higher attention than the small banner

Lumen predicts that the Adnami Topscroll would generate 7,963s of “eyes on” attention for every ‘000 impressions served. That is an attention score that is 72x higher than the small banner! This is the biggest difference in attention scores between two formats since the conception of this attention measurement project.

To better understand the performance of each format better, the graph below compares the attention scores from this study against Lumen’s normative database. The Lexus Topscroll generated a level of attentive seconds in line with Lumen’s ‘YouTube Non-skippable 20s’ norm. The Lexus Topscroll even outperformed two previously tested Adnami Topscrolls–successfully producing approximately twice the attentive seconds!

Attentive seconds per '000 impressions compared to other media channels 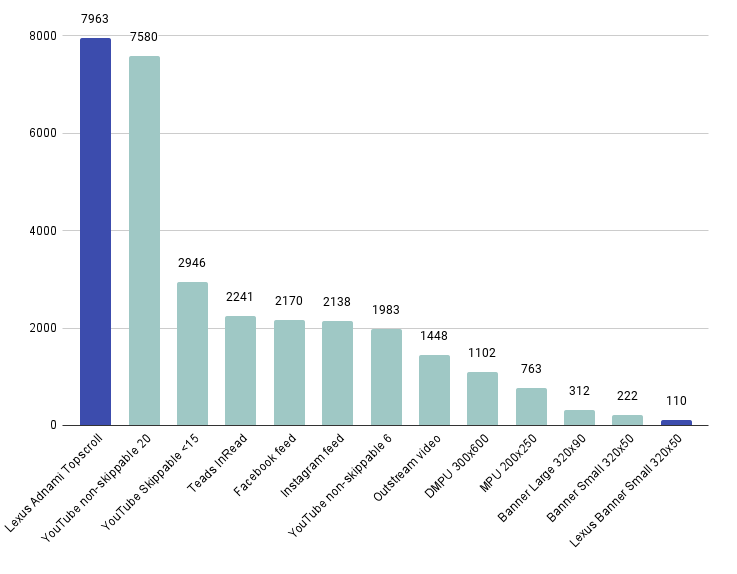 The Topscroll was successful in converting attention to recall

Respondents were more likely to recall the Lexus brand after an in-context viewing of the creative in an Adnami Topscroll format than viewing the same creative in a small banner format. A significantly high prompted recall of close to 50% was received for the Topscroll- which is 7x higher than for the small banner.